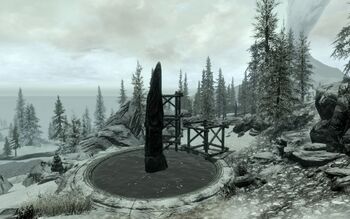 The Beast Stone is one of the All-Maker stones and is located just to the east-south-east of the Temple of Miraak, west of the Thirsk Mead Hall.

Once cleansed, it gives the Dragonborn the power Conjure Werebear, this summons a werebear to fight with the Dragonborn for 60 seconds wherever the effect is aimed. Each time this power is used, the Dragonborn must return to the Beast Stone to re-acquire it.

Several inhabitants of Bujold's Retreat initially work on the stone at night in a hypnotic trance, and also four Rieklings probably from the Thirsk Mead Hall.

Touching the Beast Stone temporarily puts the Dragonborn into a trance as well, working as a stone mason, movement will break the trance though.