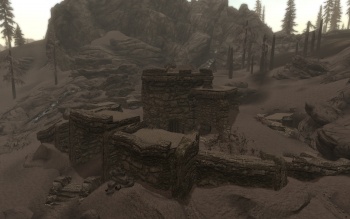 Ashfallow Citadel is an old Imperial fort in the north-west of the Sun Stone, in the eastern part of Solstheim.

Inside the tower, in the cellar a stone door cannot be opened initially, until the quest Served Cold.

The inner parts of the citadel are defended by Morag Tong assassins (×8) and the Severin family.

To the north-west of the citadel, up the stream, the source of the water is locked off by a large wooden gate. Stepping back, and judicious jumping let the Dragonborn overcome (jump over) the gate. Here the body of Usha, a Letter to Usha, another East Empire Company Strongbox with East Empire Pendant, Gold Ore ×6 and a Chest ~2770