This reptilian race, well-suited for the treacherous swamps of their Black Marsh, has developed a natural resistance to diseases and the ability to breathe underwater. The can call upon the Histskin to regenerate health very quickly.

Argonians are one of ten playable races in The Elder Scrolls V: Skyrim. They are a reptilian race, originally from Black Marsh. They can breathe under water for an unlimited amount of time and can use the power Histskin to regenerate health quickly. Argonians are considered by many players to be the second best race for playing as a thief, while the "best" race to play as a thief is the Khajiit.

Like the Khajiit, Argonians are often referred to as a 'Beast Race', as they resemble lesser animals moreso than humans and mer, from the perspective of those culturally dominant races. They existed largley in a state of slavery for many centuries until near the end of the Third Era, although even after three centuries' time they still, again like the Khajiit, experience significant discrimination, especially in Skyrim. Both 'Beast Races' are generally banned from entering the major cities in any hold, and Windhelm is known not only for its 'Gray Quarter', a ghetto reserved to the refugee Dunmer, but also for its rejected population of Argonians who live on the city's waterfront, sharing one apartment in the city wall. 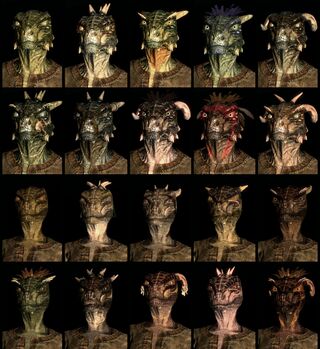