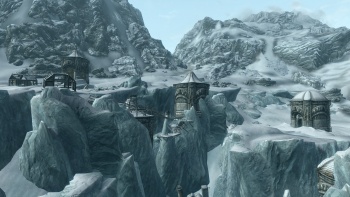 Alftand is a large Dwemer ruin located in the mountains south-west of Winterhold. Scattered about the ruin is evidence of a rather ill-fated expedition led by Sulla Trebatius. Other members of the expedition included:

Of course the ruins have Dwarven Spheres and Dwarven Spiders protecting them.

Outside the ruins are the remains of two cabins, a small campsite with bed roll and a staircase descending into the ruins proper. One cabin contains a Expedition Manifest and a Chest ~640

The Glacial Ruins are likely the first entrance found into the ruins of Alftand. There, the Dragonborn finds the remains of several members of a doomed expedition including one of the Khajiit brothers, J'zhar. The other Khajiit, J'darr attacks and must be killed in order to proceed. A blacksmith forge can be found in the chambers.

Following through the chambers the notes of the expedition continue to tell the story of its members: Sulla's Journal, Research Notes and J'zhar's Journal.

The Animonculory reveals yet more corpses of the doomed expedition, including Endrast with Endrast's Journal, Yag gra-Gortwog and Valie. There is also an alchemy lab, an anvil, a workbench and two tanning racks in this area.

The Cathedral is one of the final chambers before finding the lift to the outside world. From here, you can also enter Blackreach after using a Dwarven Mechanism to open the way. The Dwarven Centurion attacking will have the Key to Alftand Lift.

This is where the Dragonborn encounters Sulla and Umana, still alive but at each other's throats. Umana may survive but will immediately attack the Dragonborn.

This area is not actually connected to any of the other Alftand sub-locations.