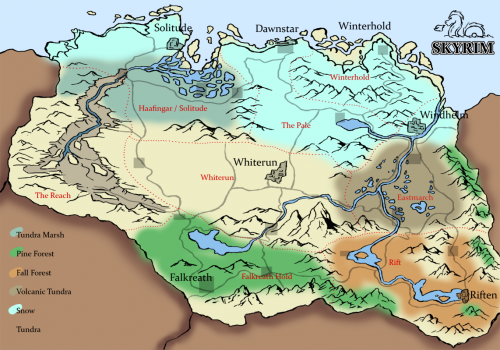 Skyrim, also known as the Old Kingdom or the Fatherland, is the home of the Nords and the setting for The Elder Scrolls V: Skyrim. It was the first region of Tamriel to be settled by humans, who migrated there from the land of Atmora in the far north, across the Sea of Ghosts. The date of this migration is unknown, although it was before the full flourishing of Elvish civilization. According to legend, Ysgramor landed first at Hsaarik Head, at the extreme northern tip of Skyrim's Broken Cape. It is said that he and his companions were fleeing the civil war in Atmora, which at that time had a sizable population. They named the land Mereth, after the many elves that roamed the virgin forests of Tamriel. 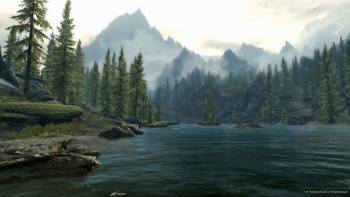 For a long while, relations between the Falmer Elves and men were relatively peaceful. However, the Falmer Elves saw that the Nords, with their vastly shorter lifespans, fast rates of physical maturation and expedient (by Elvish standards) reproductive cycle, would eventually overtake them if left unchecked. At the time, men were viewed by Falmer as being primitive and animal-like, and it was seen as no great moral remission to stop the spread of a potentially disastrous invasive species, who would destabilize the Tamrielic ecosystem. Thus, Elvish pogroms razed the city of Saarthal on what became known as the Night of Tears. Only Ysgramor and his two sons escaped back to Atmora, and, seeing the tenuous peace which had developed between the various factions, recognized the opportunity to turn their plight into a uniting force for the human race. Within a few years, Ysgramor returned to Skyrim with an army known as the "Five Hundred Companions", composed of the heroes of the Atmoran Civil War who, without much resistance, drove the Falmer out and were knighted in the foundations for the First Empire. 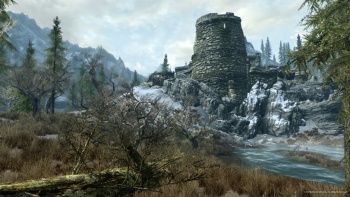 Falmer Elves persisted within the borders of Skyrim until the reign of the Thirteenth of the Ysgramor Dynasty, King Harald, at the beginning of the First Era. King Harald was the first to relinquish all holdings in Atmora (until that time, the Nords of Atmora and Skyrim had been considered the same group), proclaiming that the people of Skyrim were an independent people. All humans on Tamriel are descended from these Nords, although some bloodlines run thin.

Vrage the Gifted started the expansion that would eventually lead to the First Empire of Men. Within fifty years of his reign, the Nords ruled all of Skyrim as well as parts of High Rock , Cyrodiil , and the Dunmer lands of Morrowind . The acquisition of Morrowind was particularly bloody, still remembered in Morrowind today (the purpose of the formation of the Chimer-Dwemer kingdom of Resdayn was to expel the Nords).

The system which chose the successors to the Empire eventually proved to be its undoing. For a great while the Moot, a gathering of the lords of the many different Holds, chose the successor to the Empire. This lasted well until the death of King Borgas, when the Moot failed to nominate the popular successor. From this came the disastrous Skyrim War of Succession, during which time High Rock, Cyrodiil, and Morrowind provinces seceded with little resistance from the Nords. The war did not end until the Pact of Chieftans, when the Moot was established to convene only when there was no clear successor.

Skyrim is set to feature many different terrain types, so those who were afraid of being constantly bombarded by snow with absolutely no respite from the dreary white can rest easy. There will be forests and mountains and many other beautiful scenes for the eye to see. Skyrim is the most rugged region in the continent; not only containing five of the highest peaks in Tamriel, Skyrim also is very snowy and cold, and home to werewolves, with them being most common in the north. Only in the western reaches are there some measure of flat land, where most of the population resides. The rest of Skyrim is vertical; mountains, cliffs, and deep valleys. A variety of crops are raised in Skyrim, from wheat to the hardy snowberry. Of note is that the particular climate of Skyrim makes it the only region in Tamriel, outside of the most northern reaches of High Rock and Morrowind, suitable for the brewing of the infamous alcoholic beverage Nordic Ale, also known simply as "Rotgut". This is because that, in addition to the local availability of certain ingredients, several times during the distillation process, the substance must be subjected to extreme cold temperatures, so that it may freeze and refreeze. The drink is noted for the distinct "cold" taste, similar to extraordinarily strong mint, which persists as a feeling of ice in the stomach, as well as for the very deleterious nature of its content. Nordic Ale is illegal throughout the Empire, but this does not stop many proprietors from stocking smuggled bottles for those brave enough to try a mug.

Skyrim is a wealthy and powerful province; the hold of Haafingar has always been one of the richest and most influential regions. Recently, Solitude has grown ever more powerful, controlling much of the northern coastline following King Thian's alliance by marriage with Macalla, the Queen of Dawnstar. It has sought to expand its influence further by annexing several former Imperial fiefs, such as the island of Roscrea, ruled directly by the Emperor since Uriel Septim V conquered it in the 271st year. There are also influences from Morrowind because refugees from Morrowind escape there, bringing new ideas, cultures, and stimulating the economy. In some cities, a citizen becomes a part of the economy by either logging or blacksmithing.

Scattered across the rugged landscape of Skyrim are five massive cities, as well as minor villages and settlements. The presence of more numerous and (comparatively) smaller cities gives the land a more natural, rural feel than the somewhat urbanized Cyrodiil.

A garrison town on the northern coast of Skyrim. It was after the destruction of a fortress in Dawnstar during 2E 283 that Potentate Versidue-Shaie declared martial law, leading to one of the most brutal and bloody periods in the history of Tamriel.

A town in south-western Skyrim, close to the border with both Cyrodiil and Hammerfell.

A city in west-central Skyrim, notable at one time for possessing the Imperial College of the Voice, which was founded by Tiber Septim to restore the Voice to the art of warfare. The college is now long gone.

Riverwood is one of the first villages new arrivals encounter in Skyrim. It is a logging town located around forests and rivers. The town can provide rest, shelter, work, and trade to adventurers. A quest to Bleak Falls Barrow can be found here. (Both Ralof and Hadvar, from the opening sequences, tell you to go to Riverwood. Ralof's sister, Gerdur runs the village and pays the taxes for it and Hadvar's uncle is the blacksmith.)

Also known as Riften, this town is located in south-eastern Skyrim, close to the province's borders with both Cyrodiil and Morrowind. Home to the Skyrim Thieves' Guild, it was in Riften that Barenziah joined the Guild during her return to Morrowind from exile in Skyrim.

Whiterun is the capital of the hold by the same name. It was once referred to as the "Imperial City of Skyrim" before it underwent several acts of chaos including a dynastic feud, attacks by Hörme bandits and frost trolls, and a series of annihilating winters of alternating floods, droughts, and fires. Also located in the hold is High Hrothgar. It is interesting to note that the local giant population seems to use the tundra outside Whiterun as a pasture of sorts for their mammoth herds.

A wealthy and influential city and county in north-eastern Skyrim, Winterhold is heavily affected by Dunmer ways and ideas, being close to the border. It contains the Ysmir Collective and the well known College of Winterhold.

Solitude is the centre of Imperial influence within Skyrim. Castle Dour is located there, from which General Tullius runs the Imperial Legion. The royalty are housed within the Blue Palace. Solitude is located far north-west of the centre of the map. The home of the famous Bards College, the capital of Haafingar is also one of Skyrim's chief ports; ships from up and down the coast can be found at her crowded quays loading timber and salted cod for the markets of Wayrest, West Anvil, and Senchal. Students yearly invade the marketplace for a week of revelry, the climax of which is the burning of "King Olaf" in effigy, possibly a now-forgotten contender in the War of Succession.

Once the capital of the First Empire, the palace of the Ysgramor dynasty still dominates the centre of the Old City. Windhelm was sacked during the War of Succession, and again by the Akaviri army of Ada'Soon Dir-Kamal; the Palace of the Kings is one of the few First Empire buildings that remains. Today, Windhelm remains the only sizable city in the otherwise determinedly rural Hold of Eastmarch, and serves as a base for Imperial troops guarding the Dunmeth Pass into Morrowind.